You know, I almost feel ungrateful for even writing this list. If you knew me or just gleaned this from my writing, you would guess that this is a great time for comics for me. There is a rocking Thunderbolts title out now that’s headlined by my favorite super hero ever, the Winter Soldier. My second favorite hero, Luke Cage, is teamed up with his buddy Iron Fist in a phenomenal title of their own. The Ultimates, a comic I didn’t even know I wanted until it was announced, has blown me away issue after issue. Green Arrow has a good comic out right now, Nightwing is back and starring in his own book as well as in great Titans title with Wally West, Arsenal, Tempest, and Donna Troy. I’m pretty much in heaven right now.

But there is always that few, that list of comics you’re always waiting for to return. You’ve been waiting, hoping, praying, but they never seem to come back. I’d be dishonest if I said I didn’t have that list. So, what they hey, I’m trying to make content and build a following here, so why don’t I publish that list for all to see. Here are my Top 10 Comics that I’d like to see make a return.

I read that short-lived Mister Terrific series back at the beginning of the New 52. I don’t understand why it died so quickly. It was a great, fun, science-themed title. Michael Holt is an engaging character, and I think he is totally capable of carrying his own title. I felt that he did, but, when #8 rolled around, it got cancelled. I don’t understand why. I loved it. I guess the sales weren’t there. Admittedly, Mister Terrific isn’t exactly an A-lister. He’s probably barely hanging on as a B-Lister, but I adore him. He is a good yin to Batman’s broody yang. He’s a genius and an optimist. Apparently those two things can exist in the same person Bruce, so stop crying about your dead parents you twit.

Anyway, got off-track there. The point is, Mister Terrific was a really fun title, and I’d like to see it make a return. Next.

Another fun sci-fi adventure, Dan Jurgens put together a really good Firestorm title the last time around. I haven’t read his story from the Legends of Tomorrow mini-series yet, but I hear it was pretty good even if it did split up my beloved duo of Jason Rasch and Ronnie Raymond in favor of the more classical Ronnie and Professor Stein. I love Firestorm too, as we’ve discussed before. He’s a cool concept for a super hero: two people, one body, and a myriad of super powers. That’s cool to me, and I’d like to see his return.

Me and the Red Lanterns title from the beginning of the New 52 have a tumultuous history. I love Atrocitus, but the book stopped wanting to be about Atrocitus. Guy Gardner took over, who I love mind you, but it just wasn’t the same. Then Supergirl…became a Red Lantern for some weird reason instead of the hordes of more pissed off super heroes that exist on Earth like Hawkman, Mera, Batman, Red Hood, Arsenal, and Wonder Woman.

Anyway, I dug the hell out of this title for a long time, but the Shakespearean monologues and deteriorating art style lost me around the time the Third Army came around. I would like to see someone try it again. I love the Red Lanterns, and I love Atrocitus. Seeing Rancor, Bleez, Skallox, and Dex-Starr make a return would be really cool too. I love that it’s a Corps made up of broken individuals who have been given the ability to take vengeance against those who’ve wronged them at the cost of their own sanity. That’s pretty awesome, and Atrocitus makes for an imposing villain/anti-hero. You can sympathize with him. Who hasn’t had those moments where they think that they’d like to dish out harsh justice to every murderer, rapist, human trafficker, and every other general piece of crap in the world. Atrocitus kind of represents that, and I love him for it.

I wouldn’t have even included this if Luke Cage and Danny Rand weren’t splitting up into their own separate titles. This would probably be higher on the list if that Defenders title hadn’t been announced, even though Marvel won’t settle on a release date for it. I’ve been checking Previews every month. There’s still nothing.

Anyway, this one shouldn’t have come as a surprise. I love Luke, Danny, Misty, Colleen, and the others. I even have a line-up for it. I’d like to see this comic go back to the 1990’s template where it’s a fairly sizeable team. It would have Luke Cage, Iron Fist, Ant-Man (who was on the 90’s team and hasn’t been seen since Nick Spencer’s Astonishing Ant-Man ended), White Tiger, the new(ish) Power Man, Misty Knight, Colleen Wing, and Shang-Chi. That would be a really cool lineup. Make it happen Marvel.

I love buddy cop super hero books. Power Man and Iron Fist, Green Arrow and Green Lantern, Green Lantern and the Flash, Hawk and Dove; they’re all great to me. I love this duo. I even loved the kind mediocre early-New 52 Rob Liefeld reboot they got. War and peace, anger and compassion, violence and pacifism, I dig the duality of the duo. They play off of each other well, and they have a place in modern DC Comics. With the current political atmosphere, you really could do some interesting stuff with this setup. I’d like to see it happen. 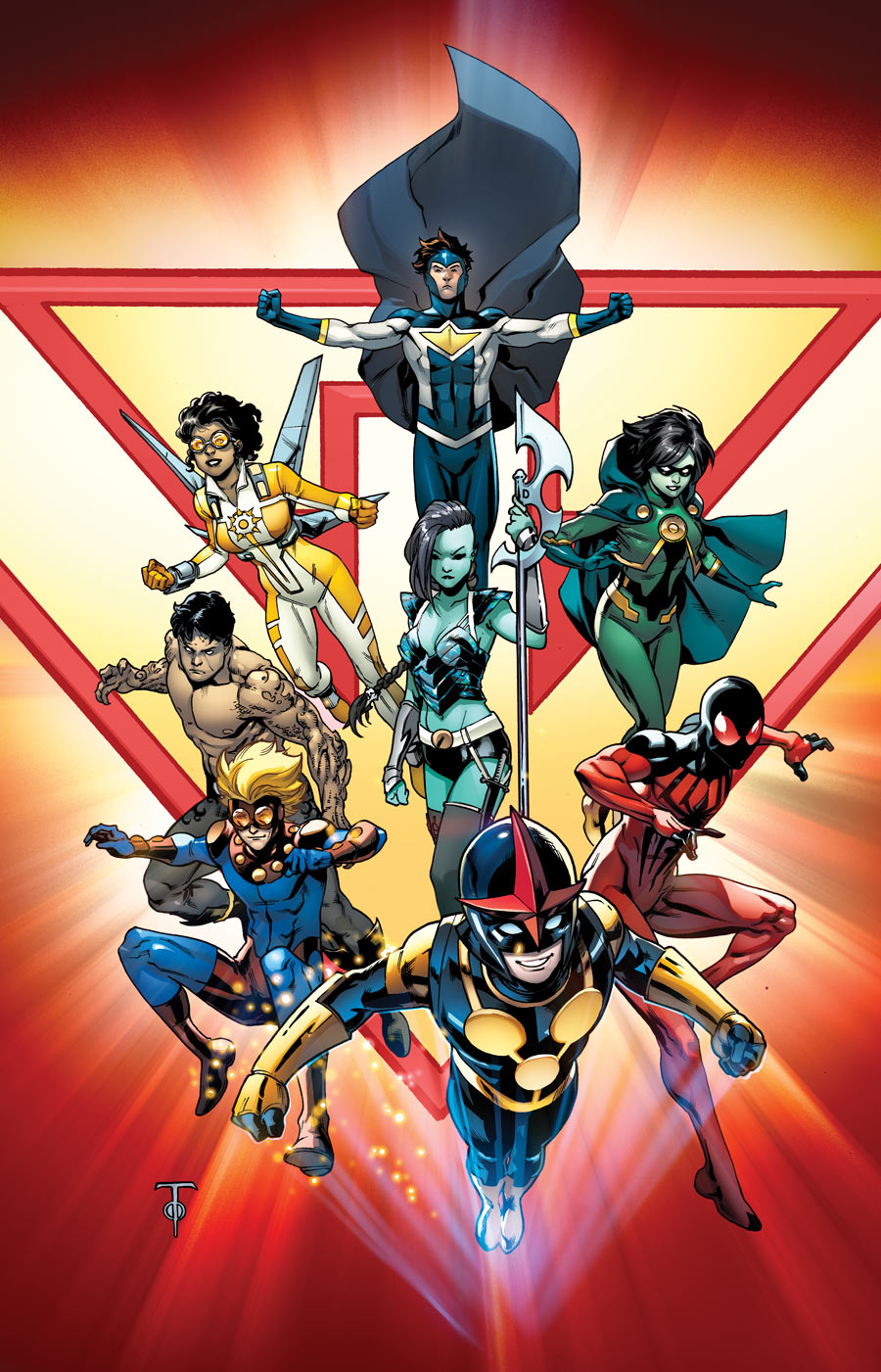 To me, the New Warriors are the better Teen Titans. They’re more about fighting the power and taking back justice for the people. That’s why they need to make a return. Again, the current political atmosphere calls for some young heroes to pick up the torch and continue the fight. They would be a good anger-driven analogue to the current Champions title. Where that book is about optimism and making the world a better place, this comic could be about showing the frustration of today’s youth. I say that as someone in their early-20’s. Why yes, I do have a lineup in mind for this comic too. It would be marrying the classic New Warriors with Christopher Yost’s spectacularly underrated recent New Warriors team: Justice, Speedball, Scarlet Spider (Kaine, not Reilly dammit), Hummingbird, Water Snake, Rage, Sungirl, Night Thrasher (I guess Donyell since Duane is still dead), and maybe Silhouette too. In all seriousness, yes, I know a lot of people prefer the classic Eddie Brock Venom. Yes, he was the original. I like him too. But Agent Venom goes beyond being my favorite Venom; he’s one of my favorite superheroes, period. What Rick Remender, Cullen Bunn, and Jeff Parker did for this character was poetry. It was heartfelt. It was beautiful. I felt for Flash Thompson more than I did for almost any other character to ever wear tights. Cullen Bunn is still really active at Marvel, and I’d like to see the comic given back to him. I actually liked his work even more than Rick Remender’s already spectacular tenure on the title. I’d also like to see Venom teamed up with Mania again. She was a really cool sidekick who didn’t get to flourish because the comic ended too soon.

This comic seems to have been maligned for some reason. I will admit, after Tony S. Daniel left as writer, the series never really recovered, even when Green Arrow and Deathstroke were brought in for the Hawkman: Wanted story. I loved the series though. I love the new look and new powers of Hawkman. I think he could easily carry his own comic again, especially if Andreyko wrote it. I wasn’t big on the ending of the aptly named The Death of Hawkman story, but I’d call the overall story great. DC could easily bring the Winged Warrior back and give him his own title or a buddy cop book with Adam Strange. So they should. Now. Chop chop. Get on it DC. I cannot stress enough how much I long for the return of the Justice Society. I’m talking about the proper Justice Society, not that Earth 2 Society crap. I want them back. DC keeps teasing at their return, but they won’t pull the trigger for some reason. I don’t think this comic ever had trouble selling, especially in recent years while Geoff Johns was writing the book.

The Justice Society is an institution in DC Comics. It was their first super hero team. It was the first super hero team ever. They have an air of prestige and legacy that no other team has ever attained or likely ever will. I won’t even give a lineup for it. As long as Jay Garrick, Alan Scott, Kent Nelson, Ted Grant, Micheal Holt, and, if they don’t get their own comics, Shazam and Hawkman, are on the team, then I’m alright.

Also, the Fantastic Four needs to come back. I didn’t put them on the list because it’s a given, and I shouldn’t have to be asking for this. They should just already be there. Josh Trank’s Fantastic Four was a flop, and it didn’t need the lack of a currently-running Fantastic Four title to do that. So bring them back Marvel. Speaking of legacies and firsts, the FF were your first Marvel Age title, and they were your first super hero team. They were the first family of heroes. So bring them back Marvel.