This felt very necessary, as the X-Men, in their long and storied history, have, at times, been far more popular than either the Avengers or the Justice League. Even with a decade and a half of movies with wildly varying levels of quality (though I think every one since First Class have been really good with the exception of the Wolverine), the X-Men have stood resilient. Even with Marvel trying to replace them with the Inhumans, the X-Men books have sold so well that Marvel have backtracked on this and are releasing a new surge of X-Men titles early next year.

Yeah, some of these are going to be kind of predictable. I’ll list the more obvious ones earlier on so that the latter will give something of a surprise. Yes, I’m doing alternates again because this is my site and I do what I want. Also, I’m not going to include Charles Xavier since he’s kind of a given, and he’s not teeeeccchnically an X-Man.

So, without further ado… I mean, come on, he is the most iconic X-Man of all time. I know I’m the B-List Defender, but I love Wolverine. He may not have made by Top 10 Marvel Heroes, but, if I did a top 20 (and I may do 11-20 someday), he would easily make that list. I know loving Wolverine is an unpopular thing among “hardcore” comic book fans, but I do anyway. I will concede that him being injected into every book in the late 2000’s was a little ludicrous, and I have a hard time seeing him as a true leader of any X-Men team. The latter of those two was a decent display of an actual character arc though. Anyway, he’s an iconic X-Man, he is a lovably grizzled bastard, and he is the best there is at what he does, even if what he does isn’t pretty.

The best leader of the X-Men in my opinion, Storm is a fearless (claustrophobia notwithstanding) and powerful mutant who took up the helm in Cyclops’ absence. She was also the first one to stand up to Slim to take over as the leader. I’m not that big a fan of Ororo Munroe as a character, but I can respect her as an iconic X-Man. She’s a great leader, among the most powerful mutants of all time, and definitely at home on this list.

Who doesn’t love the furry blue elf? He is the most compassionate X-Man, and he keeps the positivity and humanity in the group when times get hard. His visual design and costume are among the most creative made by Marvel’s writers and artists. His conflicted yet devout Catholic faith and swashbuckling charisma provide a charming depth to the character that is matched by few, and he stands as the soul of the X-Men. 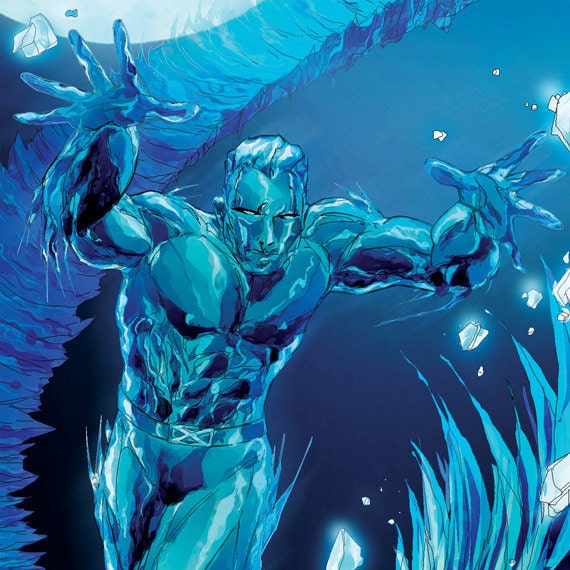 A founding member and the motor-mouth comedian of the team, Bobby Drake has stood with the X-Men through much of its complicated history. He is also one of the team’s few Omega-Level mutants, future and alternate incarnations showing that he has the potential to create sentient ice, make massive autonomous constructs, and could potentially freeze the entirety of Earth. He is another very lovable member and definitely a quintessential X-Man.

Kitty Pryde is among the most tenacious X-Men of all time. She has had a great story arc in her own right, starting off as the shy and innocent Sprite and growing up to be the fearless and dedicated Professor Kitty Pryde and a freaking Guardian of the Galaxy. Speaking of which, you can’t argue that the Peter Quill/Kitty Pryde thing isn’t one of the most random yet strangely compatible super hero relationship pairings of all time. Anyway, her tenure as a leader to the young versions of the original X-Men and a professor at the Jean Grey School have shown that Shadowcat has grown up and is a force to be reckoned with.

If Nightcrawler is the soul of the X-Men, Peter Rasputin is the gentle heart. A towering man who can turn into organic steel, Peter’s kindness is indicative of the dream of Charles Xavier. The X-Men want mutants accepted and respected by the world at large. There is a gentleness to that dream that Colossus shows as well as any other mutant. However, when his friends are in danger, Colossus reveals a warrior’s spirit and an unshakeable loyalty that is to be admired.

Every team needs their super genius, and Hank McCoy brings that to the table along with a lot of blue hair. He was a founding X-Man too, and his self-consciousness over his own appearance is very representative of the fears of the X-Men as a whole. They are afraid of their own abilities and how others perceive them. In addition, Beast, despite his name and appearance, has a very gentle heart of his own and a good sense of humor. Yes, he has spent more time with the Avengers and even the Inhumans in recent years, but he was an X-Men first and a very important part of the team.

I mean…yeah. It’s frigging Cyclops. He may have gone off the deep end in recent years, but he was still the X-Men’s first field leader. His character arc has also coincided with the challenges that the X-Men have faced very well, starting off as an optimistic boy scout and turning into a Magneto-esque radical. Cards on the table, my feelings on Scott Summers are mixed. I actually really liked the boy scout version of the character, which I know is another unpopular opinion to have. I was reluctant to accept the new Cyclops at first, seeing him as a bit of a hypocritical madman. However, he’s really been growing on me lately—just in time for Marvel to kill him. Of course.

Art by Diego Bernard and Kerem

Another dedicated X-Man who has served as a leader at times, I’m actually not that big of fan of Rogue either. However, if I weren’t trying to be objective, Magneto, Psylocke, Gambit, Banshee, and Warpath would all be on this list. I will say that her power and the curse it brings are fascinating, and I can’t deny that she has become one of the most iconic X-Men as well.

Art by Deviant Artist artgerm (check this guy out, his art is incredible)

I honestly like Jean Grey even less than I like Rogue. I wasn’t even going to include her until the last minute. However, there has to be some level of objectivity here, and Jean Grey is one of the most iconic and influential X-Men of all. She was a founding member, another Omega-Level mutant, and the center of the Phoenix Saga, one of the most popular comic book stories ever written. Even after she died (three times), she has remained one of the most important X-Men. Her death pushed Scott Summers over the edge, drove him to the manipulative Emma Frost, encouraged Wolverine to found the Jean Grey School, and has inspired a litany of mutants to take up her mantle to some degree, like Rachel Summers, Hope Summers (where the hell is that character now?), and even Cable, sort of. Even the Phoenix Force itself has returned to impact the modern Marvel world, with the X-Men trusting the entity to save them in the events that led up to Avengers vs. X-Men.

So, there are your quintessential X-Men. If you guys have an idea for another team you want to see included, let me know. I’m frankly thinking about ending these lists here, though I have been considering the Justice Society and the Teen Titans. If you guys want to see those or any other team, comment and let me know.

And, as always, keep reading comics!